The Arabica coffee value chain starts with coffee farmers and their product, the cherries. In some locations (1), this product is sold to agents collecting for processing factories, where the cherries are processed to parchments. In other locations (2), farmers process cherries to parchments to sell or authorize agents to sell. The exporters buy parchments, hulling them to beans, classifying the beans by size, taking out any imperfect beans, then shipping to their customers basically in the form of future contracts. In the first option (1) coffee beans are normally exported directly to other countries. In the second option (2) a certain proportion are sold domestic to roasters. Low quality products which could not be exported from (1) and (2) are also bought by the local roasters. 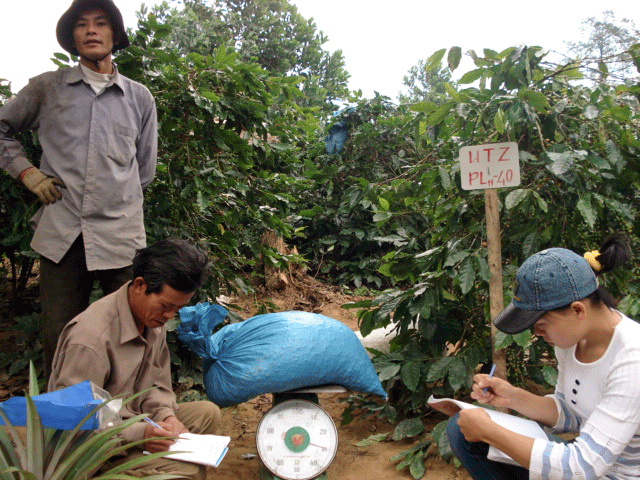 Like other agricultural commodities’ value chains, the least value added chain belongs to the farmers. The price fluctuates with the norm of good price, low price and vice versa repeating year to year. And like the other participants in the value chain, the farmers also want to increase their benefit. In the first option (1) to produce parchment, the farmers sell cherries directly to processing factories. They are not responsible for the quality of the product after selling the cherries. In one way, they try to increase benefit by sinking cherries in the water, or even putting some supplements in with the cherries to increase the weight. On the other side, they also try to reduce the production cost by increasing the harvesting amount each person could get through in a day by pulling instead of picking the cherries. As a consequence, processing factories have to invest more into technology with machines which allow them to separate ripe and unripe cherries before processing. However, their machines could not take out the cherries which were sunk in the water, which could reduce the quality of the beans afterward.

In the second option (2), farmers produce parchment themselves. As they produce for their own, they don’t need to sink cherries in the water. They could take more care for their product. However this is not very effective as the price for exporting is commonly set by exporting companies and even though the farmers have much better product, they could not gain as much as their investment. Their product then would be mixed with others for a big amount to export. Another disadvantage of this option is the investment cost for a good processing line is very high. What they could invest in this level of processing is a very small pulping machine and a brick tank for fermentation. Small scale producing causes lack of common standard and lack of quality control. The processing activities, time for fermentation, drying, and moister proportion are very different from batch to batch and family to family. The coffee beans which are sold to local roasters commonly come from this branch.

Combining the two, parchments are brought to the exporter. In this chain, the value added activities are hulling, classifying, taking out imperfect  beans, then packing for exporting. The beans left out will go back into the local market.

In the coffee value chain, the capital cycle speed is slow at the beginning of the value chain. Farmers are commonly buying fertilizers in April, July and the return will be in December or January of the next year after agencies paying them back. Processing companies buy coffee in October and November and get returns in March, May, July, September or even November of the next year. Only participants at the end of the value chain such as roasters and coffee shops have good capital cycle speed.

As the capital cycle speed at the beginning of the value chain is very slow, the coffee business is commonly avoided at this stage. Processing factories prefer buying cherries from farmers for the whole harvesting period and paying them after it has finished. They even prefer not paying all to keep the buyer and supplier relationship for the next year. Some exporters don’t want to invest into processing factories but collect parchment from agencies or households in option 2. This even keeps the capital cycle in the beginning stages slower. Instead of having responsive linkage among value chain participants to produce premium product, each participant now is trying to get as much as benefit from the participants who are behind or in front of them in the value chain. As a result, the Vietnamese beans are always lower than the reference price from New York. And Vietnamese people find it hard to find a premium coffee in the country.

Who is willing to invest with farmers to take the disadvantage of money circling just once a year to get premium product in return to serve their customers? Very rare, extremely rare. Why the roaster should do that while they could still buy the Arabica beans at the coffee agents, roast, sell and then repeat the process in such short time? Why people should invest with farmers from the plantation stage to processing, investing machines, technology and then take the loss, no profit and less profit for years just because they want to bring customer the outstanding coffee? There is only one answer, the social perspective, the responsive linkage and benefit sharing among all participants in the value chain. Only this could bring the best and stable coffee in return.